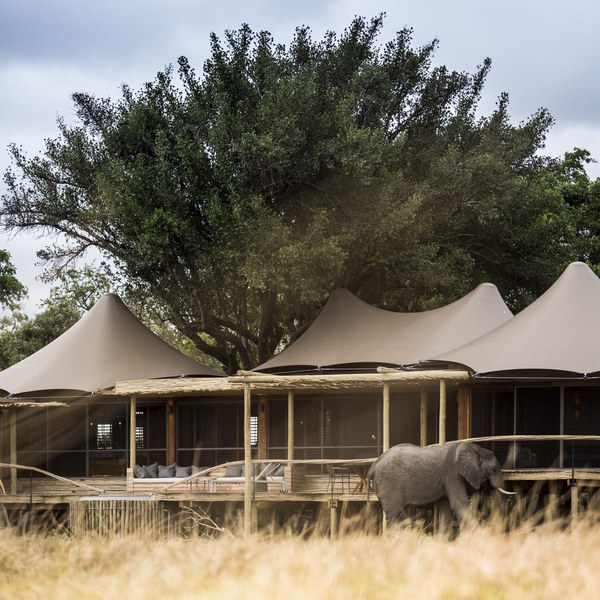 Waking up at the crack of dawn may not sound like the ideal way to start the most romantic trip of your life. But on safari, the early alarm call of nature is part of the experience. And you'll be so glad you rose with the sun as you load into your 4x4 jeep, drive out into the wild, uninhabited bush, and search for the Big Five as the golden glow of morning crests beyond the horizon.

The epic allure of an African safari is matched only by the insanity of the continent's beach destinations. There are exclusive private islands in the Seychelles, historic cultural epicenters on islands like Zanaibar, and laid-back coastal areas like Hermanus, in South Africa.

To get the best of both worlds -- since a honeymoon rarely feels complete without a little bit of sun and surf -- plan your African honeymoon as a beach-and-bush combo. Here, we've rounded up the top safari destinations and perfect sandy-shore follow-up. 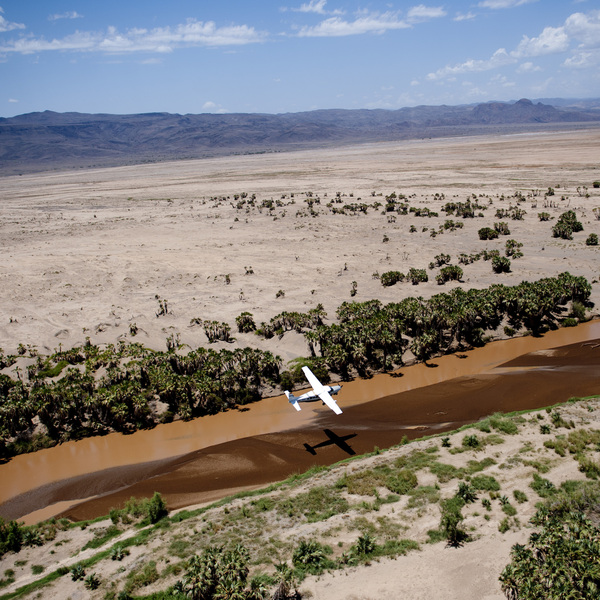 The epicness of Kenya's Masai Mara National Reserve cannot be overstated. The protected wildlife region, which extends past the Tanzania border, is an annual host of the world-famous Great Migration, recognized as one of the "Seven Wonders of the Natural World."

At the end of the rainy season (typically around May or June), more than 1.5 million wildebeest make their passage northwest, accompanied by huge herds of zebra and gazelle. As they cross wide riverbeds, large Nile crocodiles lie in wait -- and pounce on the struggling or untimely animals that fall into their domain. The drama of it all -- not to mention the grandiosity of the savanna landscapes at any other time of year -- make this a top game-viewing destination.

After the adrenaline-pumping experience of the Great Migration (book with top operator Scenic Air Safaris), chances are you'll need some serious R&R. One of the best and most convenient escapes is right within Kenya, on the quaint island of Lamu. Explore the 12th-century Lamu Town, the oldest inhabited Swahili town in Kenya. Just south, on the eastern tip of island, you'll find deserted beaches, quiet waters (where the channel opens to the ocean), and little else. 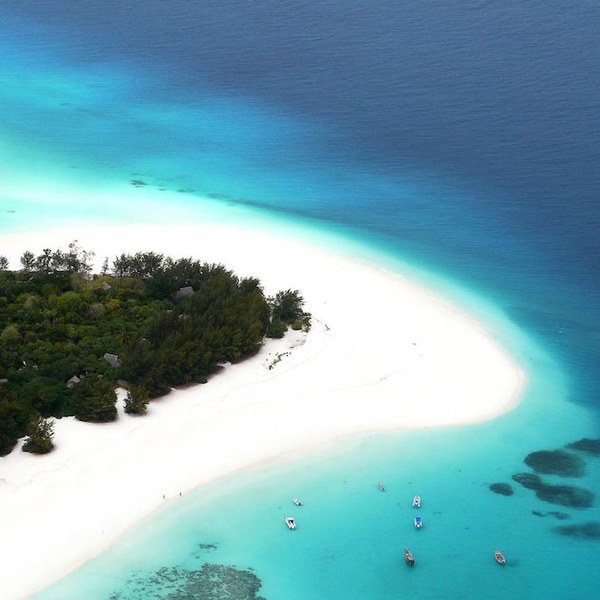 There's no bad time to visit the Serengeti National Park, dominating northwest Tanzania, as wildlife viewing is consistently top-notch throughout the year. The enormous park is more than double the size of its Kenyan counterpart, meaning you'll find less people (and sometimes less-concentrated game). For the best experience, travel during the dry season (from late June to October), when wildlife can easily be found around watering holes and when the wildebeest migration is at its absolute peak.

Most Tanzanian safari-goers choose to plop themselves on the shores of Zanzibar, a Tanzanian archipelago off the country's eastern shore. On the main island of Unguja, you'll find historic Stone Town, a historic African trade center with a singular mix of Swahili and Islamic heritages. All around the island are great accommodations for budget honeymooners. (Keep your eyes peeled for the opening of Zuri Zanzibar in June.)

If you're after more luxe digs, however, head for andbeyond Mnemba Island, a private island resort off the northeastern tip of Zanzibar. There are just 12 ultra-private Bandas (rooms) and everything is included -- meals, drinks, water sports, even scuba diving -- so you can forget about signing a bill at every turn. 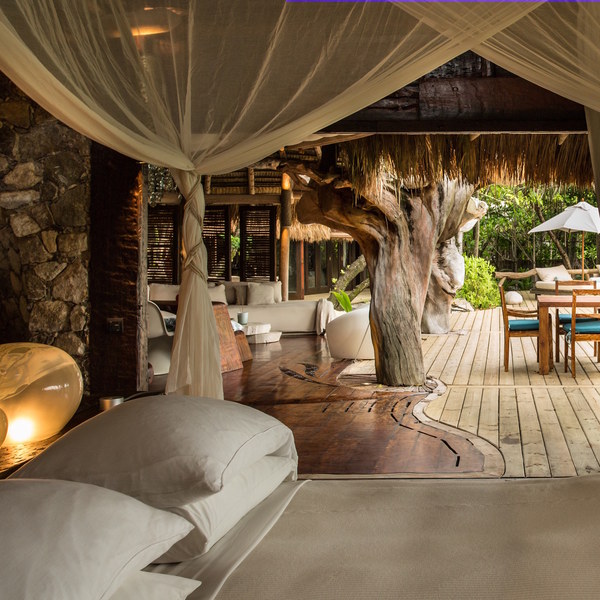 Botswana and the Seychelles

Botswana offers some of the most unique landscapes -- and the most expensive lodges -- in Africa. The country's northern region is dominated by the UNESCO World Heritage-designated Okavango Delta, a vast inland river delta that's occupied by high grasses, floodplains, and every kind of animal -- hippos, elephants, crocodiles, lions, leopards, giraffes, and more.

At lodges like Wilderness Safaris' Mombo Camp and Abu Camp you can go on twice-daily land game drives or opt for a water-based safaris in a motorized boat or a traditional dugout canoe, called a mokoro. Abu even has its own habituated elephant herd, which you can walk alongside on walking safaris. The varied experiences and postcard beauty make the Delta among Africa's most exclusive safari destinations.

The romance continues when you fly on to the island archipelago of the Seychelles, the crown jewel of the African Indian Ocean. With its granite boulder-strewn beaches and powder-soft sands, the Seychelles have "honeymoon Insta" written all over them. Whether you choose the ultra exclusive North Island, the luxe Fregate Island Private, or newcomers like the Four Seasons Resort Seychelles at Desroches Island or Six Senses Zil Pasyon, the options are endless -- and you really can't go wrong. 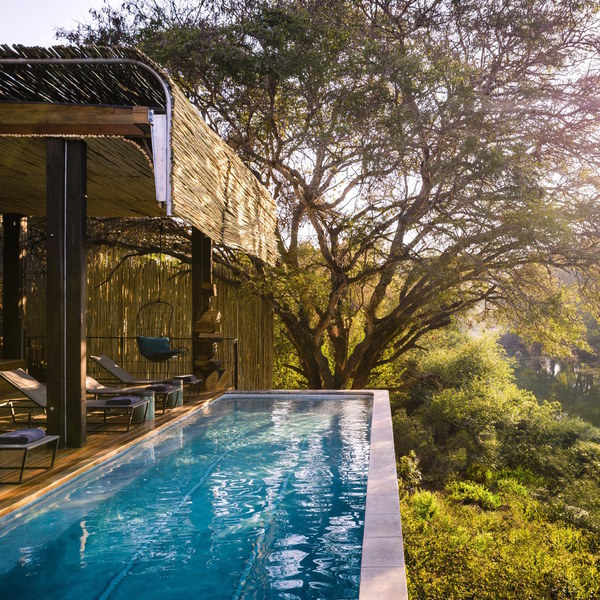 First-time safari-goers often choose the northeastern range of South Africa, home to Kruger National Park. It may be one of the largest game reserves on the continent, but its famous for its high density of wildlife. Here, you can expect to spot the Big Five (lion, leopard, elephant, rhino, and cape buffalo) in just a few short days. The most honeymoon-worthy lodges are, without doubt, Royal Malewane and any of the Singita properties, known for their top-notch guides and exceptional focus on conservation.

If you're pressed for time (or money) the easiest jaunt from Kruger is down to the Western Cape of South Africa. The laid-back town of Hermanus isn't just ideal for its gorgeous beaches, it's also one of the best places to spot Southern right whales and humpback whales from July and November, when they come here to reproduce. What could be more epic than watching whales breach just a few hundred feet from the shore -- Champagne in-hand, of course.

The Most Underrated Honeymoon Destinations

The Top 10 Hotel Amenities to Add to Your Honeymoon Registry