We were so grateful to have found Traveler’s Joy. We had planned to stay on 3 different islands, so Traveler’s Joy was essential to organizing every detail to share with our loved ones. Plus, we had way too much fun putting together our profile!

One marvelous night we had dinner on our private deck courtesy of our Traveler's Joy registry. I think that was my favorite night. How could you not love having a three-course dinner with your own server on your own private patio?

We registered for every one of our excursions, which turned out to be a very wise decision! This enabled us to see and do so many activities without constantly worrying about the credit card bills piling up.

The view from our bungalow was the island of Bora Bora since the hotel sits on a motu across the lagoon. The view was breath taking. One morning we ordered our breakfast delivered by outrigger canoe. It arrived on time and the Tahitian waitress put out an amazing spread complete with decorative flowers.

We really went to town during our days in Bora Bora and enjoyed some wonderful activities courtesy of our generous friends and the ease of using Traveler's Joy. We took jet-skis around the entire island, which gave us brilliant photo opportunities and a real adrenaline pumping high.

Our favorite activity on our dream honeymoon, thanks to our Traveler's Joy, was swimming with the dolphins. This was definitely an experience that our budget definitely would not have allowed without our friends and families generous gifts through our registry.

Deciding on the French Polynesian Islands of Tahiti, Moorea, and Bora Bora for our destination was a choice we did not regret! Traveler's Joy was a perfect opportunity for us to get exactly what we wanted for our wedding gift and do more than we had ever dreamed we could do.

To all honeymooners with small budgets: Tahiti is within reach! The key is to keep the trip short and use Traveler's Joy!

Each of us owned our own homes prior to living together and had many of the housewares that newly engaged couples typically needed. And while there were a few household items that we registered for at the local department store, we wanted our guests to be a part of our honeymoon journey. Traveler's Joy fulfilled that desire and allowed us to get even more out of the once-in-a-lifetime vacation that was starting to take form.

Our honeymoon registry was so popular with our wedding guests that we got basically everything we asked for and then had to figure out how to fit it all in. In the end, we received almost $4,000 toward honeymoon activities. It really made our honeymoon the dream vacation we wanted it to be.

Anyone traveling to Tahiti knows in advance that it is an expensive place to visit. The rooms, food and tours all add up quickly. Traveler's Joy allowed us to do more.

When we landed in Papeete, I was so excited to see the crystal-clear blue waters that my exhaustion faded instantly. We were shuttled to the ferry dock and then ferried over to Moorea for a four-night stay in a beach bungalow at the Sofitel Resort. The beach bungalow was literally about 12 feet from the water and had this wonderful covered porch area, which came in handy when the daily one-hour rain shower rolled in. During the rain, we would simply play hand after hand of gin rummy and drink Hinano Beer until it cleared up.

French Polynesia (a.k.a. Tahiti) is composed of 118 islands, spread across an area as large as Western Europe, but with a total landmass only slightly larger than the state of Rhode Island. Some isles are crowned with jagged peaks that rise out of the ocean in an explosion of green velvet, while others appear as if gracefully tossed upon the ocean, barely floating above breaking waves.

The Tahitian islands are divided into five archipelagos within the South Pacific Ocean, located approximately halfway between California and Australia. Most travelers visit the Society Islands (Tahiti, Moorea, Bora Bora, Huahine, Raiatea, and Taha'a), the Tuamotu Atolls (Rangiroa, Manihi, Tikeahu, and Fakarava), and the Marquesas, or "The Mysterious Islands."

The two other archipelagos, the Austral Islands and the Gambier Islands, lie to the south and southeast, respectively, of the Society Islands. While very few travelers venture to these remote area, those that do won't be disappointed by the pristine natural environment.

The majority of honeymooners opt for an island-hopping circuit that takes them from Tahiti to Moorea and, finally, to Bora Bora. Each destination offers its own unique slice of paradise, but couples can expect a strong Francophile influence throughout. (Tahiti and her islands are an overseas territory of France). There are also plenty of activities to fill your days: Whether you opt to ride 4x4s up a mountain, scuba dive with sharks, or swim with giant manta rays, French Polynesia is the perfect place to kick off your new life together with memorable activities for two.

Tahiti has a year-round tropical climate, with an average temperature of 78 degrees Fahrenheit. June to August is high season, when the weather is coolest and driest. Temperatures during May, September, October, and November are also mild and pleasant, and couples can take advantage of shoulder-season discounts on hotel stays during this time (if they book well enough in advance). February to April can be quite hot and muggy, so avoid traveling during those months.

Most couples visiting French Polynesia arrive via Tahiti's Faa'a Airport (PPT), which is less than an eight-hour flight from Los Angeles International Airport (LAX). Air Tahiti Nui is the national carrier, but many other international carriers offer nonstop or one-stop flights to French Polynesia on a daily or weekly basis. If your itinerary includes island-hopping, expect to do so by air -- the most expedient method of inter-island travel -- Air Tahiti and Air Moorea fly to 38 islands within the five archipelagos. 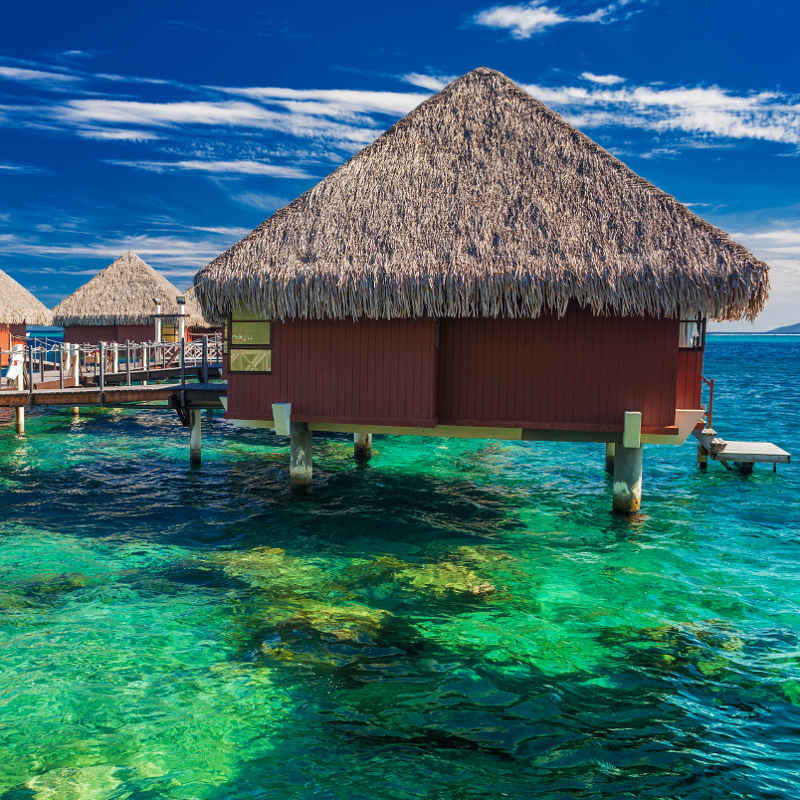